From July 2013 to July 2014, Marieke Hopman conducted a study on the meaning of the concept of “childhood” in relation to child soldiers in Rwanda. Below you find all blogs and vlogs related to this campaign, from the first to the last entry. Results of this study can be found in the MA thesis “Childhood and children’s rights”.

It is common knowledge that many child combatants are active in the DRC conflict today. Sometimes child combatants manage to leave the armed group that they are supposed to serve. What happens to Rwandan child combatants after they escape? How are they demobilized and reintegrated into society? How do we even know if they are children? And how does Rwandan government policy on this matter relate to international law?

Child combatants that manage to get away from an armed group in the DRC in which they are serving, report usually to the UN or the ICRC. If they are Rwandan, they are sent to a special demobilization camp in the Rwandan western province, as part of the Rwanda Demobilization and Reintegration Program. When I visited this camp, there were 46 children, ages said to be 14-19 years. This was considered a “quiet period”, because at that moment there was a period of relative rest in the DR Congo after an outburst of violence earlier in the year. In this camp, children get some basic education (upon arrival most are illiterate), which includes reading, writing, the Rwandan language and Rwandan history. There is one nurse employed for therapeutic purposes. The children follow a weekly schedule of schooling, leisure (sports and games) and therapy. 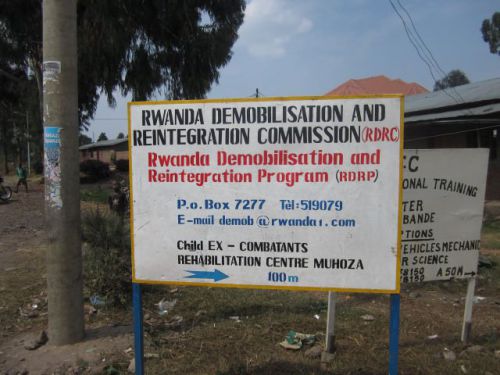 When they come out of the Congolese jungle they have to tell their age. This determines whether they are children or adults, which has as its first consequence to which camp they are sent (the adult camp or the children’s camp). But often these children do not know their age. For example, I spoke to a boy who, when I asked about his education, said he had finished second class in primary school. He said he was recruited after, ‘at age 16, when he finished his studies’. In the second class of primary school in Rwanda you are usually 8 years old. The conversation in which I tried to find out about his current age and his age at the moment of recruitment is illustrative for the complexity of child combatants and information about age:

These former child combatants get to stay in the camp for a minimum of three months and a maximum of nine months. During this period authorities try to locate family members and to reunite the children with their families – but, according to the stories I heard, this is often not very successful. Either families can’t be found or they are in the DRC, children who were recruited at a very young age might not know where they come from at all, etc. After finishing the Demobilization and Reintegration program, each person gets about €120 and a food package. They are encouraged by the two camp leaders to group together, to stay together, add up their money to be able to rent a place and maybe buy some supplies, like for example some simcards or postcards or other things they can sell in the street. There is no follow-up from the government.

The question is if in this situation the Rwandan government acts in accordance with formal law. Are these “all feasible measures” that can be taken to ensure protection and care for children who are affected by an armed conflict (CRC, art. 38.4)? Does the Rwandan government in this respect take ‘all appropriate measures to promote physical and psychological recovery and social reintegration of a child victim of (…) armed conflicts’ (CRC, art. 39)?

From my experience in the camp for former child combatants, I can positively confirm that this recovery takes place in ‘an environment which fosters the health, self-respect and dignity of the child’ (CRC, art. 39). The question is of course if all former child combatants get to go to the camp, but this seems likely since there is a follow-up situation from the point where children report to the UN up until they get to the camp, by the ICRC. However, I worry about what happens when children leave the camp. What do you do when you are a 15 year old child who, after spending six months in the camp, is put in the street with some money and some food (and maybe some friends)? Where do you go? What are you going to do? You are most likely traumatized by your experiences, you have hardly had proper schooling and now you have to survive, probably start your own business or work on a farm. I am not sure if the Rwandan government in this sense takes all appropriate measures. This situation, after children leave the camp, conflicts with Rwandan national law too, for example part two of art. 24: ‘A child who is temporarily or definitively deprived of his or her birth family shall be entitled (…) to a replacement protection which could consist of his or her placement in a foster family, an adoptive family or a placement in a relevant social welfare institution’. This does not happen. In this sense the Rwandan government can do more; they can for example find foster families for these former child combatants and provide opportunities for counselling if necessary. If they were to change policy in this respect, they have to take into account the fact that age in this situation is not a good designator anymore to decide whether someone is a child. A 15 year old child might say he is 18 years old.

The content of this article is based on the 2014 research "Childhood and Children's Rights", attachment 1: Rwandan child combantants.

After much hassling over permission I got permission to visit camp Muhoza and do interviews. So yesterday me and my interpreter went to Musanze, in the north-west of Rwanda, to visit the demobilization camp for former child combatants. In the current conflict in the Democratic Republic of Congo, it seems that all parties (except for the government army, although I am not sure about that, and of course except for the UN force) make use of child soldiers. When sometimes some of these soldiers decide to flee, they either cross jthe border to Rwanda or Uganda, or they try to reach a UN camp. Fleeing is a risky business. The ones who get caught while trying to break out are mostly killed. If they do reach the border or the UN camp, tired of fighting in the jungle, their future is still unsure. If they are Rwandese, they are collected in a Rwandan demobilization camp. This means that for a period varying from 4 months to 1 year, they get food, schooling and a bed. Here they try to prepare these ex-combatants for the return into Rwandan society, for example by teaching them Rwandan history and by giving them counselling.

We were received very friendly and welcoming in this camp – they even picked us up from the bus station and we were asked to sign a guestbook (last entry: October 2012). In one of the classrooms we did four interviews. The children seem to be well taken care of in the camps. There are 46 boys currently staying in the camp. They have games, a volleyball net, one psychologist. Officially, their ages vary from 15-19, but the problem is that after years in the jungle and no birthday parties, you do not know your age. One of the boys that we interviewed was recruited as a child soldier when he was 8 years old. He said he was now 17 and almost mature, but I would say he was 14 at the most. Most of these children (if not all) are badly traumatized. For them their biggest current problem, except for psychological struggle, is the fact that in the jungle they have lacked education for so long. In the camp they get some schooling, but they said, how are we going to make a living without education? When they get out of the camp they get RWF 100.000 (which is about €120). They are advised to group together, with five or six of their fellow camp-members, to rent a place and maybe start a business.They cannot afford to go to school. 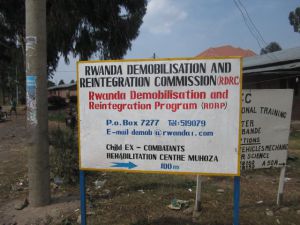 On the one hand, it is very impressive of the Rwandan government that they take care of these kids so well, even after they have usually fought against the best interests of Rwanda (for example for the FDLR, which is the group that in 1994 were the aggressors during the genocide, killing about a million people. After the genocide they fled Rwanda, into the DRC jungle, where they are still active and still cherishing the idea of returning to Rwanda to finish what they started). On the other hand, what will come of these children after they leave the camp? Will society accept them? Will their family take them back lovingly (provided family members are still alive and can be found)? Will they ever be able to make a living?

Some images from Rwanda

These are some images that I shot during the last couple of days. Getting in touch with Rwandan children makes me wonder about childhood even more. After working with children in the Netherlands for years, I find so far that these children are just like any children. They like to dance, to draw, if one has a pencil and the other doesn’t they take it from eachother and then they negotiate..they want to hold your hand..

Dance practice with the kids

Goodmorning! Just a little something to make you smile…

Interview with the rector of the university of Byumba

Yesterday I went to the university in Byumba (north Rwanda) to do an interview with the rector. In the video Dr. Faustin Nyombayire tells about what his young university needs and how exchange with western universities would be mutually benificient. Also, he says something aout the interview that we did for my research..

Children’s Rights Research
This email address is being protected from spambots. You need JavaScript enabled to view it.

Fund
The Children’s Rights Research Fund supports research that aims to improve the living conditions of children all over the world.
More information

Enter your email address to subscribe for the latest updates about our research projects.